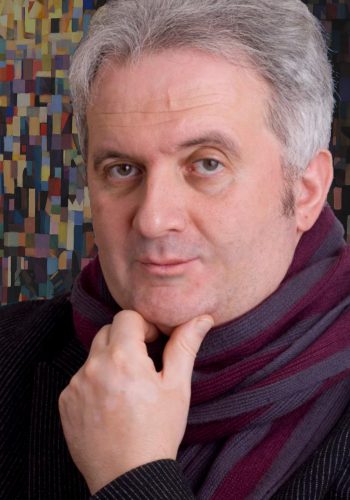 Born 1958, in Riga, Latvia, Sasha Ginsburg began to paint already at an early age. He studied under the guidance of famous Latvian painters such as Kurt Fridrihsons, Abram Bikov and Vitaly Karkunov. In 1980 he published his first work and later began to participate in various exhibitions. 1991 Ginsburg immigrated to Osnabrueck, Germany, where he began leading a Orthodox Jewish life which hence influenced the theme of his paintings. Sasha often turns to different materials and techniques. Thus in recent years, he created series of paintings with stone and mosaic motives. Sasha also works intensively as portraitist and experiments with gold colour and surrealistic themes. Since his immigration to Germany Sasha Ginsburg was able to exibiton his works around the world and constantly works on creating new painting series stressing diverse Biblical topics.